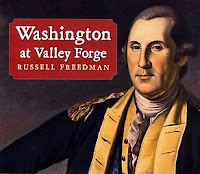 During the winter of 1777-78 George Washington decided to winter the troops at Valley Forge about twenty miles northwest of Philadelphia where the British were stationed. His men were tired, sick, malnourished, and practically naked as they faced the winter. Washington pleaded with Congress for needed supplies, but they did not believe there was really a need; Washington had spread rumors about the strength of his army in order to scare the British and had the unexpected side effect of confusing his own government. When representatives from Congress finally arrived they noticed the need and with Washington's help, transformed the supply system. With the troops receiving amble supplies and military training provided by General Friedrich von Steuben, when the troops left Valley Forge in the late spring, they were ready to take on the British. Though more than 2,000 men perished due to lack of supplies during their encampment, what the men learned and the brotherhood formed there gave them the spirit to carry on and win the war.

Once again Russell Freedman has done an excellent job giving life to history. This book is a great companion to his other work Lafayette and the American Revolution.