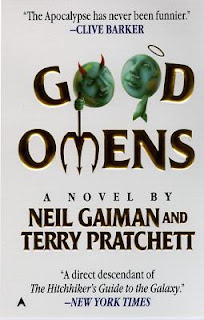 What happens when the angel, Aziraphale, and fallen angel, Crowley, decide they’d much rather keep living among the humans on earth than follow through with Armageddon? With Terry Pratchett and Neil Gaiman writing together, the answer is a crazy ride through the last days of earth with a handful of hilarious characters such as the Anathema Device, a descendant of Agnes Nutter (the only witch to have all of her prophecies come true, if only you can understand them), a pre-teen antichrist, Shadwell, a Scottish witch hunter, and many more.

While there were many moments in this book that were pure comedic genius, overall I felt the book was very confusing. That being said, I think this book needs to be treated like the movie Monty Python and the Holy Grail, where the more times you watch it, the funnier it becomes.