The Kid Who Climbed Everest 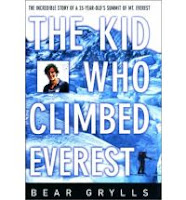 Bear Grylls is the host of T.V.'s Man Vs. Wild and in this biography he tells of his effort to climb Everest. In 1996 he was a Special Forces soldier parachuting over the African Desert but when his parachute did not open, he broke his back. During the long grueling months of bed rest and therapy he decided to pursue his childhood dream of climbing Mt. Everest. He was only 23-years-old in 1998 when he made this attempt and he candidly shares his struggles and doubts during the long months spent on the mountain.

I have not read any books about Everest before so I learned a lot about the difficulty and struggles these dedicated climbers face. Bear Grylls has a very easy writing style but there are some major editing mistakes. There is some swearing and a lot of talk about going to the bathroom, but I guess that would be a critical part of living on a mountain for three months.