Farm City: the Eduation of an Urban Farmer 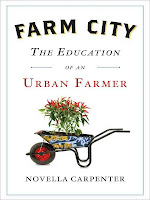 An entertaining tale of one woman's quest to turn an abandoned lot in downtown Oakland into a mini farm. Starting with bees, Novella worked her way up to chickens, ducks, rabbits and finally pigs. At times hilarious, readers will enjoy learning about her frustrations as she attempts to feed and care for the increasingly huge and unwieldy animals. In addition to those frustrations she must also deal with the homeless, drug dealers, and skeptical neighbors. A fun book, although be aware, she doesn't shy away from describing the process of slaughtering the animals for consumption.