The Man in the Rockefeller Suit 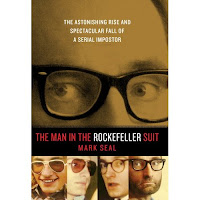 The Man in the Rockefeller Suit: The Astonishing Rise and Spectacular Fall of a Serial Impostor
by Mark Seal
Viking, 2011. 323 pgs. Nonfiction

When the story of a parental kidnapping in Boston went out over the newswires in 2008, it seemed initially like a routine family tragedy. But it took strange twists as time passed. The father, wealthy businessman Clark Rockefeller, was not who he seemed to be. In fact, no one at all knew who he was. This episode ended the long career of professional imposter and con man Christian Karl Gerhartsreiter, originally from the tiny German village of Bergen. His ambition to emigrate to America and become a filmmaker took him from Boston to California and back. Charm, arrogance, and a wickedly sharp mind helped him create his personae but also enabled him to maintain his lifestyle by stealing, swindling…and maybe worse.

I remember reading bits and pieces of the story of Clark Rockefeller a few years ago when the story first broke, but I’d always wanted to know more. This book lays out the entire chronology of his life, particularly focusing on his years of deception in America. The author interviews a number of people who interacted with “Rockefeller”, and describes testimony at his trial in order to try and understand why he did what he did. The story really was as exciting as I thought it would be, and it made me wonder whether I would be deceived by someone like this guy.