The Keeper of Lost Causes 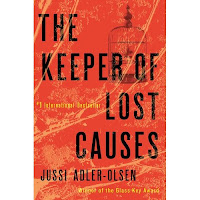 The Keeper of Lost Causes
by Jussi Adler-Olsen, translated from the Danish by Lisa Hartford
Dutton, 2011. 396 pgs. Mystery.

When Carl Mørck and two of his friends from the police force are ambushed during a murder investigation, Carl is wounded, one of the other officers is killed, and one is paralyzed. Carl loses all interest in his career and when he is assigned as the head of a new department (of one) to investigate cold cases, he figures to hunker down in his basement office and do a lot of nothing until he can retire. But he requests an assistant and along comes Assad, a Syrian (maybe) who has been granted asylum in Denmark and who has certain skills that go well beyond his custodial and secretarial duties. Assad nudges Carl into action and they take on the case of Merete Lynggaard, a prominent political figure who disappeared five years earlier on a trip with her brain-damaged brother across the North Sea to Germany. What the reader knows that Carl and Assad don't is that Merete did not drown--pushed overboard by person or persons unknown--but is the captive of a truly evil triumvirate (two man and a woman in a wheelchair) who have imprisoned her under the direst conditions with no hint of a motive. Suspense builds almost unbearably as Carl and Assad assemble the pieces of this deeply complex case and and try to put them together before it is too late for the woman who is, unbelievably, still alive, but not for long.