They Called Themselves the K.K.K. 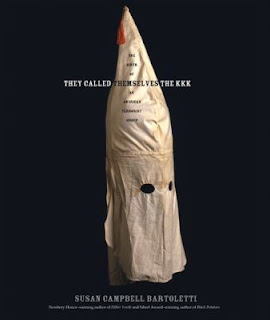 Susan Campbell Bartoletti describes how the Ku Klux Klan arose, beginning in 1866 with six friends in Pulaski, Tennessee who decided to start a club. From that group, which enjoyed riding around in white sheets, pulling pranks. However, in the southern states, where many were frustrated by the restrictions of Reconstruction after the Civil War, the group exploded into the "Invisible Empire," set on enforcing white supremacy, using fear and violence both to coerce whites to join and to try to keep former slaves from succeeding.

This book is interesting and highly informative. Bartoletti does a great job of describing the post-Civil War south and recounting how a group like the K.K.K. could begin and wreak havoc on others. This is an excellent example of historical young adult reading.