No Apology: The Case for American Greatness 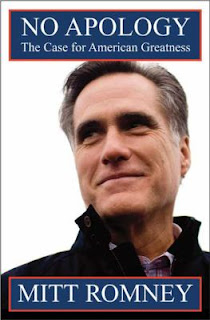 Don’t think that Mitt Romney was content to fade from the political arena when his bid for the presidency was foiled. He’s back. Or rather, he never really retreated; he’s just biding his time.

Romney isn’t satisfied with the current president and he’s especially unhappy with Obama’s “apology tour” –feeling the current president is unduly apologizing to other nations for America’s greatness. Why apologize? is Romney’s view. In No Apology Romney spells out his emphatic opinion: America is a great nation, she’s earned the right to the title and she shouldn’t be afraid to govern and lead the free world.

Romeny loves America, but sees something declining. He believes America is facing challenges that the current administration is both inadequate for and unable to address. It’s a refreshingly candid and transparent look at Romney’s view of the global environment. He identifies the four major world players in the gain for supremacy: America, the Middle East, China and Russia. To be frank, it’s enough to scare your socks off. It’s an admirable overview of world politics and easy enough to understand if you’re not politically minded. In 11 cogently written chapters, Romney identifies just why America is great, why we need to retain our supremacy and how we can do it. He argues, “The best ally world peace has ever known is a strong America”.

The book is both smart and readable. So, if you’re not happy with the current administration, look to Romney, whose faith in the American people and his bid for future office are still quite optimistic.