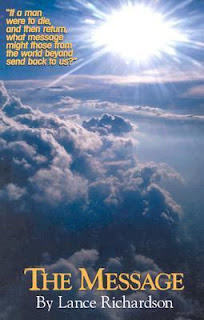 Lance Richardson died. While that statement usually has a certain finality to it, in this case it’s not as irrevocable as it sounds. That’s because, after spending a large amount of time in a heaven-like environment, Richardson’s spirit returned to his comatose body and he returned to life. He describes this other world in great detail, the people he met, the experiences he had and just what the afterlife is all about. He talks about the colors, music, architecture (and yes, even the books!) he remembers.

This brief, but engrossing read has been making the rounds lately, causing a small stir and a lot of talk. It's a lot to take in, but the book is simple, readable and if it's as true as Richardson says, it has instant ramifications. And the message? Well, it’s one of love, service and constitutional freedom. Doesn’t sound bad to me. Whether you believe it or not, you’ll want to read it—if only to see what all the fuss is about.