Nephi in the Promised Land 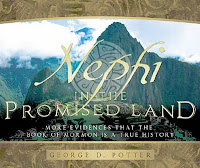 Nephi in the Promised Land: More Evidences That the Book of Mormon is a True History
By George D. Potter
CFI, 2009. 252 pgs. Nonfiction

Potter has assembled a variety of parallels and similarities between the geography and culture depicted in the Book of Mormon and that of the Native American culture of ancient Peru. Historical accounts, mythology, geography, archaeological evidence, and linguistics are all brought to bear in Potter’s argument. There are many very interesting facts presented throughout this book. Yet despite the study that has clearly gone into this book, the resulting text is less than convincing.

Although generally attractive in its design and illustrated with many photographs and maps, I found that the horizontal oblong format was awkward to hold and read and the maps are often grainy and of poor quality. While the endnotes and handsome bibliography are useful, one wonders at the complete omission of an index. Unfortunately, this is really more of a "coffee table" book than anything else. Despite the research and documentation, the numerous parallels presented here smack more of a Sunday evening fireside than a serious academic study.