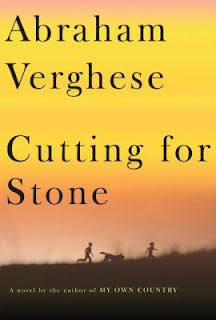 A number of miracles occurred on the day that twins Marion and Shiva were born, none of which saved the life of their mother, Sister Mary Joseph Praise. She was a nun working as a surgical nurse in an Ethiopian mission hospital and had somehow kept everyone unaware of her state until she was found nearly unconscious, in labor, and bleeding terribly. From that fateful day, the boys grew and flourished under the care of the close knit hospital staff and their families. But tragedy, lies, and betrayal will tear the twins apart, as well as their surrogate family, in this dramatic tale of unending love, unbearable loss, and ultimate sacrifice.

Cutting for Stone is a story of the ties that bind us to each other, told before the backdrop of a country devastated by civil war and political upheaval. Along the lines of Poisonwood Bible, I can easily see this as something Oprah would embrace and recommend. Readers should be warned that the text is extremely graphic, though not with gratuitous sex or bloody violence. Instead, this is a book filled with surgical details beyond anything I have ever encountered in a work of fiction. At times I felt the novel could double as a surgical textbook as it described procedures and conditions that could make squeamish individuals lose their appetite for the story.