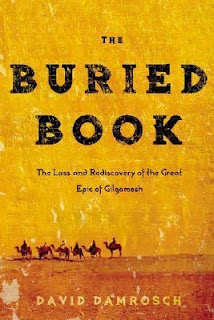 The Buried Book: The Loss and Rediscovery of the Great Epic of Gilgamesh
By David Damrosch
Holt, 2007. 315 pgs. Nonfiction

The Epic of Gilgamesh is considered to be the first masterpiece of world literature. However, the only intact record of this epic poem lay buried and forgotten for over 2,000 years following the sack of Nineveh in 612 B.C. Several copies, written on stone tablets in cuneiform writing, were uncovered by archeologists and reintroduced to the world in the late 1800’s. Buried Book tells the story of key individuals whose lives were wrapped up in the fate of Gilgamesh’s tale.

Buried Book lacks a coherent narrative. Damrosch spends over half the book discussing the lives of George Smith, whose work was key in piecing together and translating the clay tablets containing the tale of Gilgamesh, and Hormuzd Rassam who worked for years to secure the artifacts from Nineveh for the British Museum. While these men, along with other minor players introduced, were fascinating and did much to bring us the epic poem, the amount of time spent telling of their lives and unrelated details makes the text seem tedious. Finally, towards the end of the book, Damrosch speaks of Ashurbanipal and his great library of cuneiform tables along with a summary of the actual legend of Gilgamesh and his role in history. Oddly, the most fascinating portion of the book was the epilogue which discussed the effect this ancient piece of literature had on Saddam Hussein and a number of modern writers. This book introduces a fascinating topic, but presents an uneven and unfocused exploration of it.