Dreams From My Father: A Story of Race and Inheritance 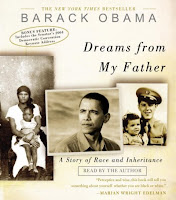 Dreams From My Father: A Story of Race and Inheritance
By Barack Obama
Three Rivers Press, 2004. 442 pgs. Nonfiction

This is Barack's story of his early life and actually of his learning about his heritage--both from his Kansas-born mother and his Kenyan-born father. He relates things he learns along the way from his mother, his step-father, his maternal grandparents, and others. The story he relates is told with candor and compassion and is both interesting and illuminating.

I listened to this as an audiobook. The book is narrated by Barack himself and he does a nice job on the various voices in the text.