Jane and the Madness of Lord Byron 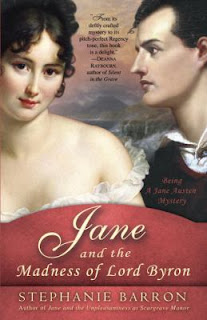 Jane Austen and her brother Henry travel to Brighton to comfort themselves after the death of Henry’s wife and Jane’s dear friend Eliza. While journeying there, Jane rescues a young woman, Catherine, trapped in a carriage only to discover that Lord Byron is her captor and ardent suitor. Jane and Catherine meet a few more times and Catherine confides her fear of Byron to Jane. When Catherine is found dead in Byron’s bedchamber, Jane sets out to find Catherine’s murderer.

This is the latest in a series featuring Jane Austen as a detective and is another great addition. Barron has really captured Jane Austen’s voice and has put her, for the most part, in the places Austen really lived and visited during her life. Fans of mysteries and of Jane Austen will love this series.