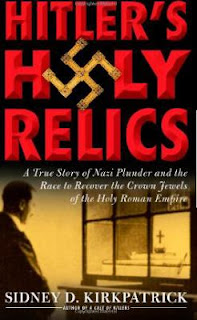 Hitler's Holy Relics: A True Story of Nazi Plunder and the Race to Recover the Crown Jewels of the Holy Roman Empire
By Sidney Kirkpatrick
Simon and Schuster, 2010, 336 pgs.

Before and during World War II the Nazi’s plundered and hid away an immense number of art treasures. The art was hidden in salt mines, underground bunkers and vaults. During and after the war, the officers of the Monuments Fine Arts and Archives (MFAA), a special Allied military group, worked to determine the original owners and repatriate stolen art. Walter Horn, a German national who had moved to the United States before the war, was one of these men charged with preserving the cultural monuments and heritage of war-torn Europe. He volunteered to serve in the military and was assigned to interrogate German prisoners of war in preparation for Nazi war crimes tribunals.
One of the POWs told him of a special bunker under the city of Nurenburg containing the 1000 year-old crown jewels of the Holy Roman Empire. When the bunker was entered by the US military, several important items were missing from the collection. Captain Horn was assigned to discover who took them. As a German and a former art history professor at Berkeley he was well prepared to understand the significance of the crown jewels to the Nazi movement and Hitler personally. This book follows his investigation and reveals the symbolic importance of the relics.
The retelling is gripping, though I missed seeing the photos since I listened to the audiobook. I would highly recommend this book to anyone interested in World War II or art history.
SH

Excellent review, as always. Have you seen the movie The Train, with Burt Lancaster and Catherine Deneuve? It is a fine film about trying to save art from the Nazis.