Secret History of the Mongol Queens 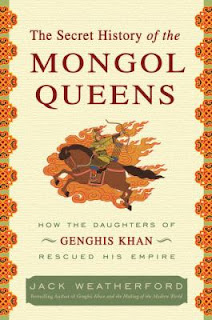 Secret History of the Mongol Queens: How the Daughters of Genghis Khan Rescued His Empire
By J. McIver Weatherford
Crown Publishers, 2010. 317 pgs. Nonfiction

Genghis Khan rose to power at the dawn of the 13th Century. He conquered a vast empire through bloody campaigns that spanned decades. Because his legacy is one of brutal conquest, you may be surprised to learn of his great respect for and dependence on women to maintain control of such an expansive territory. Not one of his sons was ever entrusted with governing any portion of his empire. Instead, he married his daughters to conquered rulers and gave them power to govern in his stead. Unfortunately, soon after his death, the empire crumbled and his daughters lost power. More amazing female leaders followed throughout the history of the Mongols and this book attempts to tell the stories of their strength and influence, which extends beyond what you may guess.

If you thought the history of the Tudors was filled with intrigue and scandal, you certainly have not read up on the history of the Mongols and the great Khans. I admit to having a difficult time remembering whose name belongs to whom, what their connections and politics were, and what their significance was, but if you get past that, this book is a wealth of fascinating stories about amazing individuals in a cold and inhospitable area of the world. I was completely swept up in the lives of these nomads and their proud history. A must read for anyone who enjoys popular history writing.