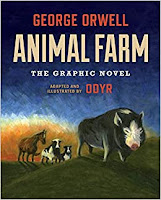 Odyr, a Brazilian graphic novelist, brings to life the events of George Orwell's Animal Farm with page after page of gorgeous surrealist-esque images. Odyr took Orwell's vision of a parable fable and gets across in images the truly bloody results of communism and trusting societal powers too much. On a farm in England, a pig named Major has a dream, a dream that tells him of the farm animal's oppressed state, of the fact that they are slaves. Once major dies, his dream becomes the prophetic backing for a new movement called Animalism, where those with two legs are the enemy, those with four legs or wings are friends, all animals are equal, and animals should not wear clothes, drink alcohol, sleep in a bed, or kill another animal. An opportunity arises, and the animals rebel, taking over the farm. With the power in hand, the animals set out to make a world where their animalism values are honored, and in the process trade one oppressive leader for another.

For those who like the classics like Ray Bradbury's Faranheit 451 and Orwell's 1984, but want to experience a classic in a different way, this book is for you. The graphic novel edition also does a great job of giving you some emotional distance from the characters so you can really see and understand what Orwell was trying to say about the political philosophies that gave rise to the Soviet Union.