Emperors of the Ice 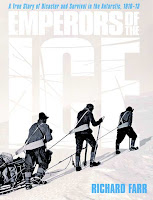 Aspley Cherry-Garrard, a.k.a. Cherry, was a surprising choice to go with Captain Robert Falcon Scott on his fateful expedition to Antarctica. However, he was selected to go on the journey and experienced the adventure of a lifetime, including a three-man expedition through unbelievable conditions to gather eggs from Emperor penguins for scientific research. Cherry was not one of the men chosen to try to make it to the South Pole, but he was one of the men who went to search for Scott's party when they did not return.

This book is an interesting blend of fiction (since the book is told from Cherry's first-person point of view but not written by Cherry) and nonfiction (since it's based extensively on Cherry's own writing and other historical documents and it's only the dialogue that is imagined). It was interesting to see how the trip was about more than just making it to the Pole; it was also about science and experimentation. This is a fine book for those interested in learning more about Antarctic exploration.